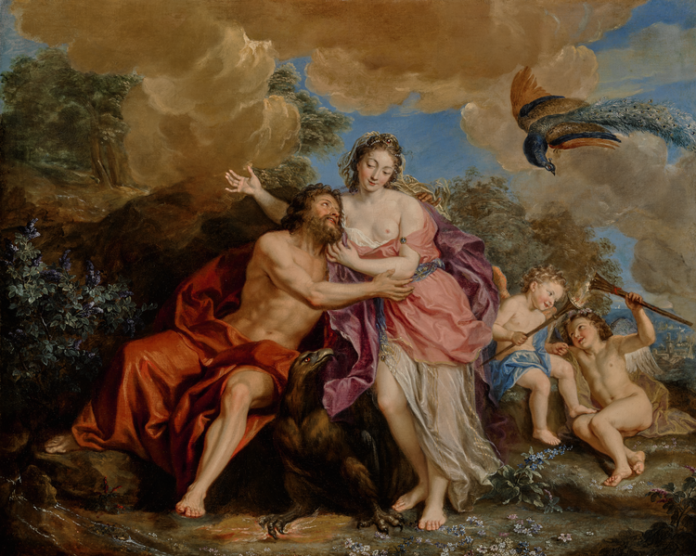 Art is profoundly known for its ability to express emotion. However, before the era of cameras and photography, paintings were the only way to capture a moment visually. They give us a glance at a vastly different period!

One particular subject of interest was the deities of Greek Mythology. Full of rich culture, Greek Mythology paintings never cease to amuse the viewer.

An essential element of Greek Mythology is how goddesses were given as much attention as the gods, possibly more. So let us take a journey through that period by looking at five mythology paintings that were genuinely empowering.

Hera is the Greek goddess of marriage as well as motherhood, adequately given that title for her loving marriage to Zeus with over ten children. Hera was jealous of the countless lovers Zeus would take; therefore, showing her support of monogamous marriage.

An exemplary visualization of her matriarchy is a painting by Charles-Antoine Coypel known as Jupiter and Juno on Mount Ida dated back to the 18th Century. Coypel was a French painter who was also the curator of the King.

The artwork shows Zeus and Hera in an affectionate embrace with two young children. With Hera being at the center of the canvas, it is evident that she is the focus of attention. The way Zeus is looking up toward her shows his admiration of her. In this painting, Hera represents the vital role of a wife and mother.

Athena was the goddess of war, wisdom, and craft. She was especially known for her power and authority; Ares, the god of war, was said to have feared her. Athena was never tempted by love.

French artist, Jacques-Louis David, depicted her in the famous painting named Minerva Fighting Mars of 1771 A.D. He was deemed the preeminent artist of his time, known for his interest in the art and culture of antiquity.

In this painting of Minerva (Athena) Fighting Mars (Ares), we see Ares defeated on the ground, not even grasping his weapon as Athena stands triumphantly as others look on.

We see the value of color is darker on the left side of the painting where Ares is, and lighter where Athena is standing; this brings attention to Athena’s victory. Athena is a fine model of female independence, not relying on another god for power.

Perhaps the most famous amongst the Greek goddesses is Aphrodite, goddess of love, beauty, and fertility. Few men who saw her could resist falling in love with her despite her being married.

Apelles, responsible for painting one of the most famous artworks of Aphrodite, called Aphrodite Rising from the Sea, was likely painted during the Greek Renaissance period of 800-600 BC. The original painting has been lost.

This Greek goddess painting shows Aphrodite emerging from a shell in the ocean since she was conceived and born in the sea. The bright colors and scenic background emphasize her beauty. To her left are another two gods and to her right, a mortal woman; this is evident in the effects she had on both deity and human. Aphrodite is a beacon of femininity and freedom, inspiring women to celebrate their own beauty.

Hestia was the goddess of fire; not the sort of fiery vengeance you may be picturing, but rather the goddess of the hearth – the floor of a fireplace. In ancient times, the fire was a necessity, bringing warmth and peace into a home.

There were many paintings depicting Hestia as a Vestal Virgin. However, one such painting stands out as particularly beautiful, painted by artist, Jean Raoux, known for his historical paintings.

In the painting, we see Hestia holding an ancient torch, dressed in a veil and a crown of flowers. The veil symbolizes virginity, which Hestia pursued until she died, and the flower crown represented her love of peace.

Although receiving two marriage proposals, Hestia remained unmarried. Hestia was confident in her choice of servitude and purity. She is an icon for liberation from conformity.

Artemis, goddess of hunting, the moon, and chastity. She is often shown with a bow and arrow, or alongside animals. Like Athena and Hestia, Artemis remained a virgin for all eternity. However, she took her vow more strongly than they did, often cursing or killing anyone who tried to take her purity.

A renowned artwork about Artemis was painted in the 16th Century by Tiziano Vecellio, better known as Titian, who was famous for his High Renaissance Art Movement. The painting is named Artemis and Callisto.

In the painting, Artemis stands tall to the right of the painting while Callisto is being supported by others on the left. Callisto was a follower of Artemis but wound up falling pregnant. This angered Artemis and led to Callisto’s expulsion.

The way in which Titian painted Artemis with her strong figure supports Artemis’ will to protect her vow. Artemis is an example of resilience, motivating people to stick to their decisions even when pursued otherwise.

Greek goddesses were powerful subjects of art, depicted as strong feminine symbols. There is no doubt that anyone who gazes upon these paintings will be captivated by how their stories were captured in history. And you can always browse more awe-inspiring paintings in the 1st Art Gallery.

Essential Pieces of Decor for the Living Room

Art Work from the Golden Age of Pulp Fiction Painting

How to Choose the Best Wall Paint Colours for Your Home?